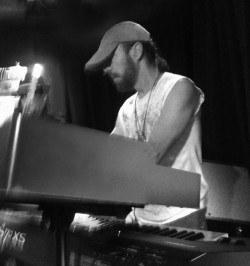 Jim Talley is a lifelong pianist, keyboardist and piano teacher who started playing piano before the age of four! After studying classical music into his teenage years he studied jazz at Cabrillo College in Aptos, Ca with renowned teachers Ray Brown & Paul Nagle (Bobby McFerrin, Robben Ford) and began playing in many different bands in the 1980’s. Since then he has performed on various stages in the Bay Area and up and down the west coast of California with a wide variety of artists including Bob Weir, Eric McFadden, Karl Denson, Stu Allen, Dan Hicks, Elvin Bishop, Tommy Castro, members of Monophonics, Vinyl, Mark Karan, Tony Saunders, Cole Tate, Barry Sless, Bobby Vega, North Beach Brass Band, LZ Phoenix, Lumanation, the Beautiful Losers & many others.

He has appeared at many of the finest venues in the Bay Area including the Warfield Theatre, Great American Music Hall, Concord Pavilion, the Regency, Slim’s, Terrapin Crossroads, and many times at the old and the new Sweetwater Music Hall as well as House of Blues in L.A. He has performed at festivals ranging from the Haight St. Faire to the SF Pride Festival to the Oregon Country Faire.

His diverse musical tastes have led him into many different groups including the funk of LZ Phoenix, his original jazz-funk project Tres Mojo, the eclectic rock stylings of Eric McFadden & the Faraway Bros., the dub rock of Lumanation and the pop-rock of the Beautiful Losers.

“Talley Up!” mixes psychedelic jammin’ funk originals with funky New Orleans covers from the Meters, Dr. John, Neville Bros., Allen Toussaint, Jon Cleary and Dumpstaphunk along with a slew of vocal and instrumental funk songs to fill the dance floor! The band has found a home locally at Phil Lesh’s club Terrapin Crossroads in San Rafael, Ca. with regular performances in the bar and an upcoming show in the Grate Room.

“You can not find a better New Orleans style band in the Bay Area than Talley Up! “
~ Mitch Stein (The Radiators, The Gatorators, Cryptical)
Keyboardist, Producer, Promoter

“Jim Talley is a great keyboardist! It’s a damn pleasure to play with him!!”
~ Eric McFadden (Parliament/Funkadelic, Eric Burdon)
Guitarist